First, Professor Yasuhisa Hirata mentioned that his team is going to develop AI robots to create a vibrant society based on human robot interaction. Their project will be carried out with many researchers and institutions. They also asked some psychologist to analyze the safety efficacy. Therefore, it will be interdisciplinary research. He hopes that his team can start the collaboration research in the near future and looks forward to discussing AI robots from various perspective.

Professor Wen-Chen Chang gave a speech on behalf of National Yang Ming Chiao Tung University School of Law. She said that their university has had a big change at the beginning of this year. Originated as a national university, they were merged with another very prominent university, National Yang Ming University, specializing in medicine and related areas. With the merge, their law school has been empowered quite much, not only for themselves, but also for interdisciplinary collaborations within the university. So, they are now able to work with the School of Medicine, the College of informatics and the College of semiconductor industry to try to have an international interdisciplinary focus within the university and cultivate the next generation of young scholars being capable of working in those different areas. And not only with their law school, recently, they also created a university level center, The. Center for Digital governance and Legal Innovation. The center is primarily based in the law school, but also with the cross-disciplining cooperation with many other main key members from the School of Medicine, School of Public Health, and School of Informatics. They are working together to develop cross-disciplinary education and research projects. 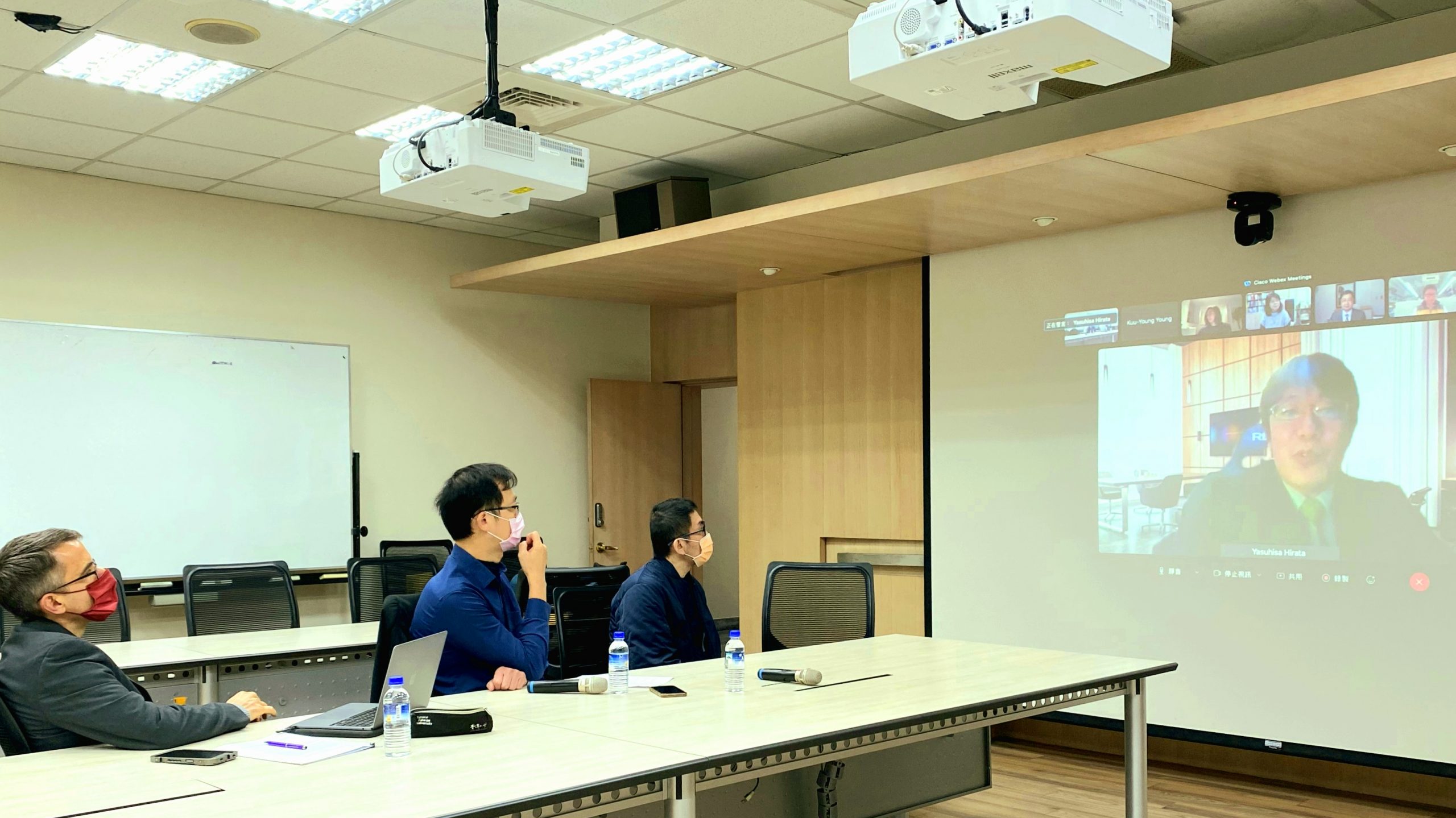 In the first section, there were four wonderful and promising scholars from the United States, Europe, and East Asia to share their research results about AI and robots.

The first speaker was Yueh-Hsuan Weng, an assistant professor from The Frontier Research Institute for Interdisciplinary Sciences at Tohoku University in Japan. The title of his report was “The Moonshot’s Vision for Adaptable AI Robots.” His research focuses on the moonshot projects and the concept of the next generation of adaptable AI robots. He is currently affiliated with FRIS. FRIS (The Frontier Research Institute for Interdisciplinary Sciences of Tohoku University) is a newly established platform under Tohoku University’s Organization for Advanced Studies, and its mission is to promote creative interdisciplinary research. Its final goal is to develop a new and promising research discipline across the legacy model fields. FRIS implements several measures to support interdisciplinary research, and one major measure is to assign researchers to work with other departments in the university. Because of this policy, Yueh-Hsuan Weng had the chance to work with Professor Yasuhisa Hirata and other robotic scientists. Then, he introduced the program “Society 5.0”. The purpose of Society 5.0 is to establish a human-centered society, a society where humans and AI can co-exist. Society 5.0 is the Moonshot R&D program. Moonshot Goal 1 is the realization of a society in which human beings can be free from limitations of body, brain, space, and time by 2050. In addition, Moonshot Goal 3 is the realization of AI robots that autonomously learn, adapt to their environment, evolve in intelligence and act alongside human beings, by 2050. Co-existence and co-evolution of the robots and human beings will create a vibrant society in which older people can participate. So, the vision of the Society 5.0 in 2050 is that robots will be everywhere in our daily lives, and we will all be using them naturally. Their goal is to develop AI robots that can provide appropriate support and services depending on where they are used and the condition of the user.

The second speaker was Dr. Mona Naomi Lintvedt from the department of private law of University of Oslo in Norway. The title of her report was “Vulnerability in the Robot Society.” She reported that her objective for the project is to address the challenges robotics pose to humans in security, privacy, and safety. Her project team focuses on the processing of personal data, which is a strong research topic relating to privacy and data protection. They also want to incorporate issues of human robot interaction. And in that respect, they will examine existing legal and ethical frameworks, and future possible regulations of robots. She mentioned several objectives of her project, such as “How can we address the challenges robotics poses to human security, privacy and safety through technological and regulatory choices?”, “How does the design of the physical aspect of robots affect the security, privacy and safety concerns and to what degree does the physical component of robotics justify its conception as a distinct regulatory field?”, “In light of on-going technical development of robots, to what degree are existing legal and ethical frameworks in the area of security, privacy and safety adequate to deal with developments in robotics and AI?”, and “Which technological choices and regulatory models could be revised and/or devised, and in which ways, to develop policies and technical solutions that further facilitate robotics and AI in publicly acceptable directions?”. In addition, there is ongoing research relating to impact assessment, the interplay between robots, cybersecurity, and safety from a European legal perspective, and the suitability of EU data protection law for regulating AI and AI-supported decisional processes.

The third speaker was Professor Chih-Hisung Chen from National Yang Ming Chiao Tung University School of Law. The title of his report was “Care Robot – Ethical and Legal Issues.” He mentioned that there are privacy issues regarding care robots, such as patient’s privacy and family or caregiver’s privacy. And the information collection ability of robots (images or audio) is sophisticated. But patients and their caregivers may not realize that a robot’s sensors and its ability to record the environment are stronger than their imagination. Besides, robots can deliver this information to a clinical provider, or to a developer or other third party. He also mentioned the problem of the ownership of the information after elders pass away. And he concluded that care robots can be solutions to many problems in aging societies, and unambiguous regulations are important for industrial development. In addition, cultural variation might lead to different ethical rules for care robots.

The last speaker was Professor Mark L. Shope from National Yang Ming Chiao Tung University School of Law. The title of his report was “Assisting NGOs in Treaty Body Engagement Relating to Artificial Intelligence Issues.” He mentioned multiple UN conventions relating to Human Rights, and said that NGOs should monitor the extent to which governments are protecting human rights in the face of artificial intelligence advancements. He provided concrete suggestions for NGOs to use and help in their reporting process, or shadow reporting, to the specific treaty body under these UN conventions.

In the second section, there was a roundtable discussion. The scenario was introduced by Professor Kuu-Young Young from National Yang Ming Chiao Tung University, which was about AI robots providing their robotic services with the promise of enhancing the user’s self-efficacy. The speakers shared their thoughts and opinions regarding these issues.

Professor Mark L. Shope said that there are many kinds of robots that we might foresee in everyday life. Robots in law enforcement, military, intelligence gathering and other different ways. And he recognized that AI and robots have the potential to do good things, and there’s also potential for some bad.

Yueh-Hsuan Weng said that robots are used for the military applications in many countries, which is quite risky and controversial. From a legal perspective, handling these kinds of controversial issues is very challenging. Because AI is an emerging technology, the speed of its development is fast. Therefore, it is a critical challenge to propose sound regulation for robotics.

The online workshop was very successful. And the next workshop will be held in the near future.